Rani Molla at GigaOm has written a great blog post about the Wearable Man, focusing on everything from Google Glass — that allow you to do anything you normally would with your phone or laptop without using your hands — to fitbit and other health-related devices.

It’s becoming more true every day: computers aren’t things in a room that you visit (or are trapped in); they’re tools you can adapt and use in order to create your best self.

And where does the HAPIfork belong in this new ecosystem of personal tools? While we don’t wear our fork (!) if we have just the one special fork, we are going to want it with us at all times, ready to go… right?

Good news: the HAPIfork will come with its own compact case. And, in those situations where you eat but don’t have ready access to a way to clean off your fork before you return it to your case — remember, HAPIfork can go into the dishwasher — you can bring hand wipes, including these iHerb wipes that are designed for edible food.

The HAPIfork is not only a tool that can train you to change your behavior without you really needing to focus on anything in particular, it’s also something that can help you if you DO want to focus on something in particular! The HAPIfork collects information about how fast you’re eating, and how much you’re eating. You can watch over time as you adapt to the tool, and even slow down further than HAPIfork wants you to. You can compare that with how and when you exercise, and how much you sleep. You can learn when you have your own particular challenges, and develop specific strategies to affect them.

We’ll be providing more detail on how to use the technology to meet specific goals in future posts! At HAPILABS, we are dedicated to helping you get wherever you want to go.

Amazing! Thank you so much for all you’re support!

In fact, many people have asked us how they are supposed to order multiple forks. So we went ahead and added three more Pledge Levels:

If you have already ordered a HAPIfork and want to change and order more, you can press the blue button on the top right “Manage Your Pledge.” On the next page, switch by clicking the circle next to the pledge level you now want. Scroll to the bottom and press “Continue” and follow the prompts from there.

Any questions, please ask on Kickstarter or email support@hapilabs.com!

I asked one of my close friends to try out the HAPIfork. He’s a very gracious yet highly “go-getter” person, a Type A Driver VP of Sales, well over 6 feet tall who puts away a high-energy, big man’s amount of food. I sincerely wondered whether the fork vibrating as he ate quickly (er… very quickly) would make him want to chuck the fork across the room.

His response was that it was definitely annoying. He wasn’t sure what to do when it vibrated – I suspect he was eating so quickly that he couldn’t slow down enough for it to wait 8 seconds between bites. (The forks that are for sale will have adjustable intervals.) But he added that he liked the idea of slowing down mid-day, of really enjoying his lunch. He felt it was something he cherished that he didn’t always remember to do.

I like the idea of slowing down and smelling the roses in the middle of the day.

It was he who suggested “It’s your lunch – enjoy it!” Because it was his lunch, and — even someone who hates being held back by anything or anyone — extracting all the value he possibly could from his lunch was very appealing.

As it turns out, Larry Magid had the same type of experience.

The prototypes have been in the hands of some of the more lucky HAPILABS staff, and that includes me!

How the Fork Works

In short: pretty simply. I turn it on by depressing a button at the base. Then I eat with it, just exactly like using a regular fork. It vibrates if it goes into my mouth more frequently than its setting (currently 8 seconds). If it vibrates, I wait a little bit before the next bite to make sure that it doesn’t vibrate again. Mostly it just reminds me, “Another forkful already?”

My Experience So Far

First, yes of course I’m biased! But I’ll give you my impression and you can decide to be as skeptical as you wish.

Well as it turns out, I think odd things! For example, one time when the fork vibrated I caught myself thinking “NO – wait! That’s not fair! That last bite was tiny – I have more room in mouth….!”  And then I realized, “Oh just hang on, the point is not to stuff as much food into my mouth as fast as possible after all, is it?” Hmmmm.

It feels a little bit like what I guess my roommate’s dog experienced during clicker training. I don’t really have to work hard at being mindful, because the fork reminds me to be mindful at a visceral level, like body awareness. Of course I get my rewards when the fork does NOT vibrate, so it’s not exactly the same. So it is like the fork is training me to be more mindful automatically. I know that sounds like a paradox, but so it goes.

So many people have asked about cleaning the fork that I have a photo here of it disassembled. The outer casing is dishwasher safe.

The inner part of the fork slips out easily.

I also am a picky person when it comes to the weight of the utensil. I  was a little bit concerned about the circumference, but despite the fact I have small hands (I’m just under 5′ tall, or 1.51m), it was fine to eat with and I liked the weight.

We’re everywhere, except a few times, it’s not us! There are contests and competitions – there are even people posing as us on Twitter! (wow!)

Any other sites are set up by other people and are outside our control. If you have any questions, please add in the comments. I’ll update as we find things that are confusing, but again – contact us if you have questions. feedback@hapilabs.com

It is with great HAPIness that I am finally, FINALLY able to let you know how to order your own HAPIfork! As many of you have guessed, suggested, or actually heard, we’re raising funds on Kickstarter.

GO NOW if you want to buy one, because I the first 2500 people get a discount! Then watch our video, because frankly it’s informative AND adorable.

P.S. Did you see us on the news? Is your part of the world talking a lot about the HAPIfork? Add it in the comments!

It turns out that you don’t even have to concentrate hard to reap the portion control benefits of mindfulness!

At HAPILABS, we’ve recently been talking about some work done at Cornell’s Food and Brand Lab by Dr. Andrew Geier, Dr. Brian Wansink and Dr. Paul Rozin. It’s a paradox: you can be both mindful and mindless at the same time.

The idea of this research was to figure out how to stop mindless snacking by introducing mindfulness without having to fundamentally overhaul someone’s eating behavior. The researchers did a simple experiment: they brought students in to watch a movie, and served them tubes of Lays Stackables, some of which contained chips dyed red at regular intervals. 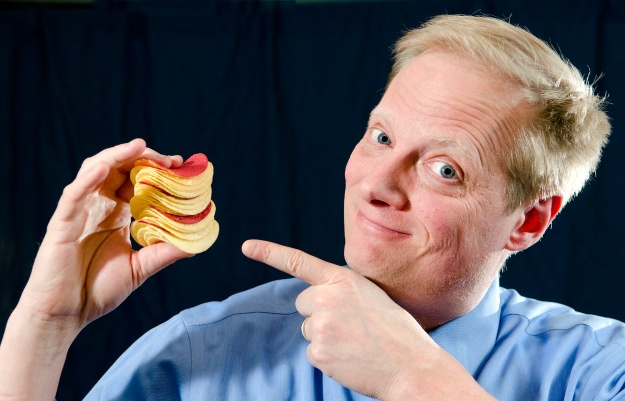 Some people had tubes with no red chips at all, and others had a red chip at every serving size, and another at every two-servings. So there were three types of potato chip tubes: one with no red chips, one with a red chip every 7 chips, and another with a red chip every 14 chips. (There was a second experiment to verify and expand on the first with the no-red-chip tubes, and then tubes with red chips every 5 chips and every 10 chips.)

As it turns out, college students can go through a lot of chips! But when they ran across the red chips, they stopped. In fact, the students who encountered red chips ate about 50% less than their peers without red chips. And more than that, the ones who had red chips were very good at estimating how many total chips they ate. Their estimates were off by less than one chip, compared to the group without red chips – they underestimated by over a dozen, nearly a third of the total chips eaten!

Think about it: Being “off” when you guess how much you eat by nearly ⅓ is like thinking you are taking in a daily dose of 2000 calories, but it’s really 3000.

In one class, the divider chips were simply dyed red and students were told the chips were left over from a past experiment. In the other class, it was a tomato basil chip and students believed they were participating in a study to test food companies’ new flavor-mixing strategy.

There was a plausible reason given for finding the red chips, but the students didn’t know that they were being tested on consumption. Yet, the wider the spacing of the red chips, the more people ate.